A while back I picked up Triple Aught Design’s Rogue RS Jacket which is made from a nylon-cotton blend. It’s a light layer, suited to cooler weather, and is overbuilt as most items from Triple Aught Design are. I was hoping to find a layer which was versatile, but mostly suited to casual wear. After a year of wearing and using the jacket, here are my thoughts. 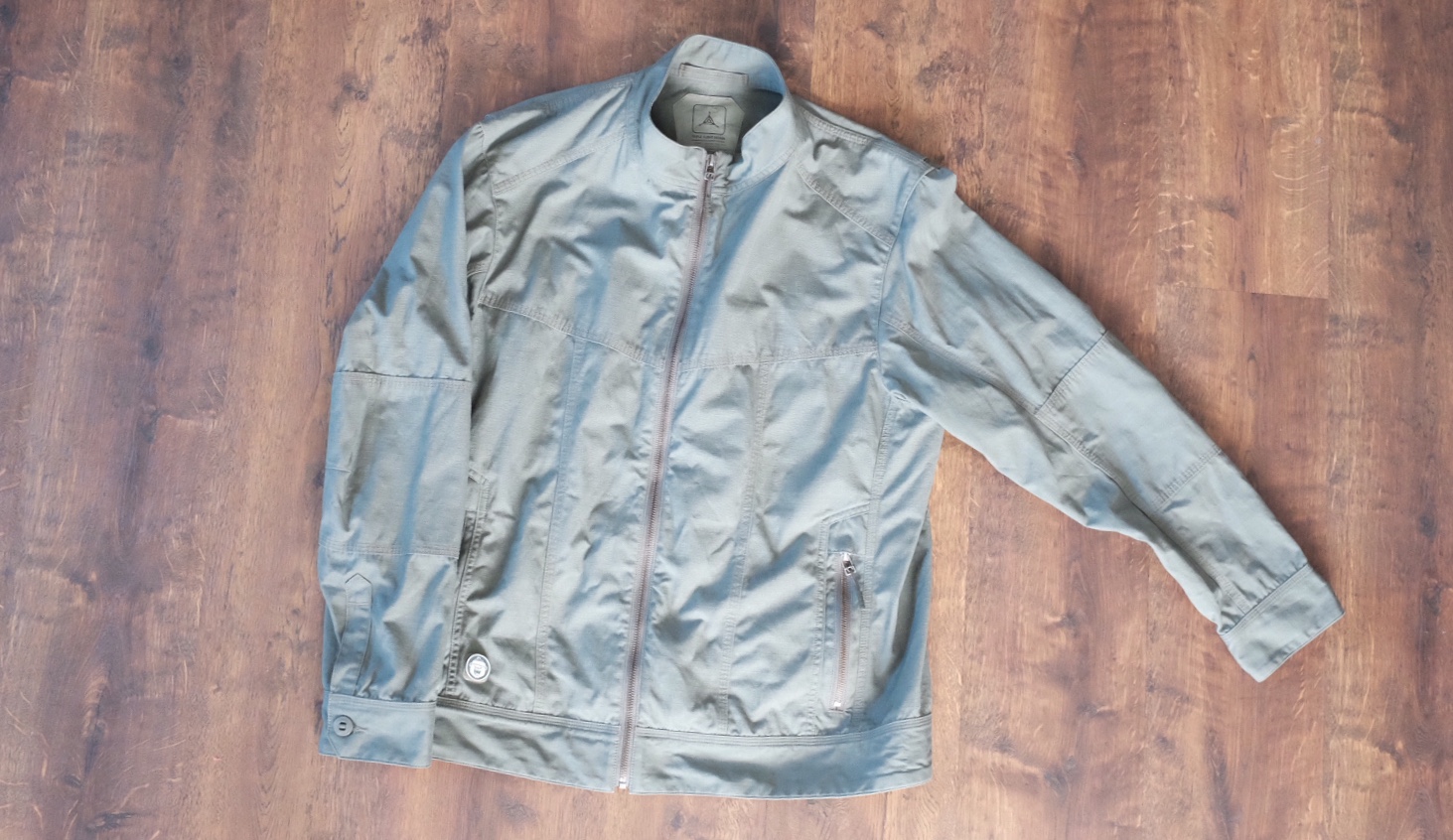 This is a heavy 52/48 Nylon Cotton (NYCO) ripstop which comes in at about 6.5oz and has a DWR coating. Surprisingly, the DWR is quite good, and even though the jacket mostly feels like a heavy canvas, it repels light water well enough that you won’t regret wearing it if a light sprinkle happens. I would not wear it in the rain though.

Because of the high cotton content, the jacket looks standard. The nylon gives the jacket added strength, which has proven effective for car camping outings I have taken the jacket on. Overall the fabric looks heavy it doesn’t feel too heavy, it generally looks good. Performance wise, it dries slow, repels light water, but is very durable. After more than a year, it still looks brand new. 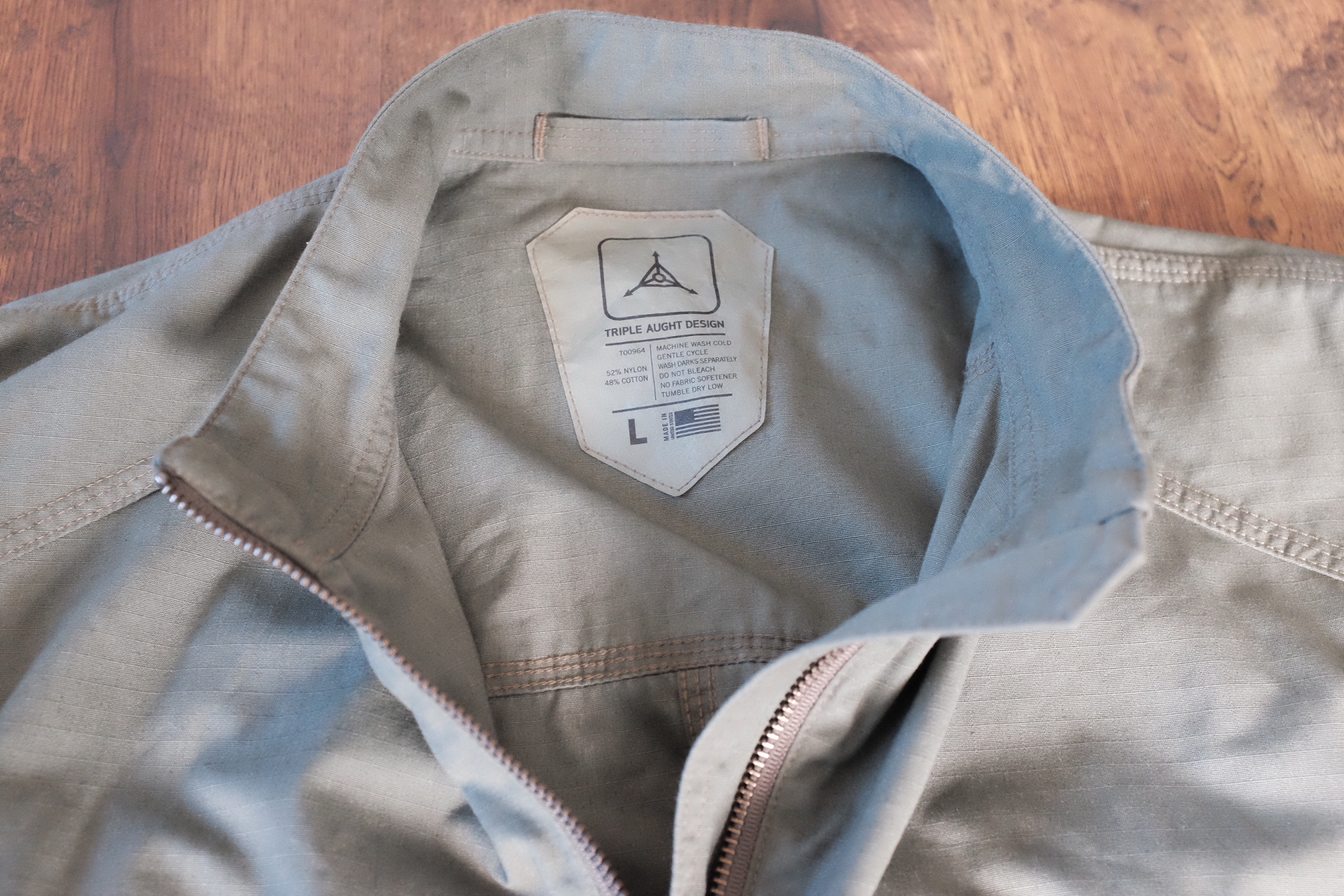 The fit was tricky for me when I bought the jacket. I originally bought an XL in Deception but that proved much too big. However, I liked the jacket enough that I exchanged it for a Large in ME Green, as that was the only color available in size Large. The large fits me perfectly, however TAD has since redone the sizing on the jacket, so be sure to read the size guide.

The fit is listed as “standard” but I would say it’s more of an athletic fit, which I find quite nice. The overall style is very military inspired. Note that TAD sells two variants: with and without patches. I chose the version without, and the difference is that on the biceps of each arm, the patch version has an area of Velcro loop for applying morale patches. There is still one small Velcro loop area with a TAD logo on it. This can be removed and replaced by any hook backed patch (the size you want is “eye”). 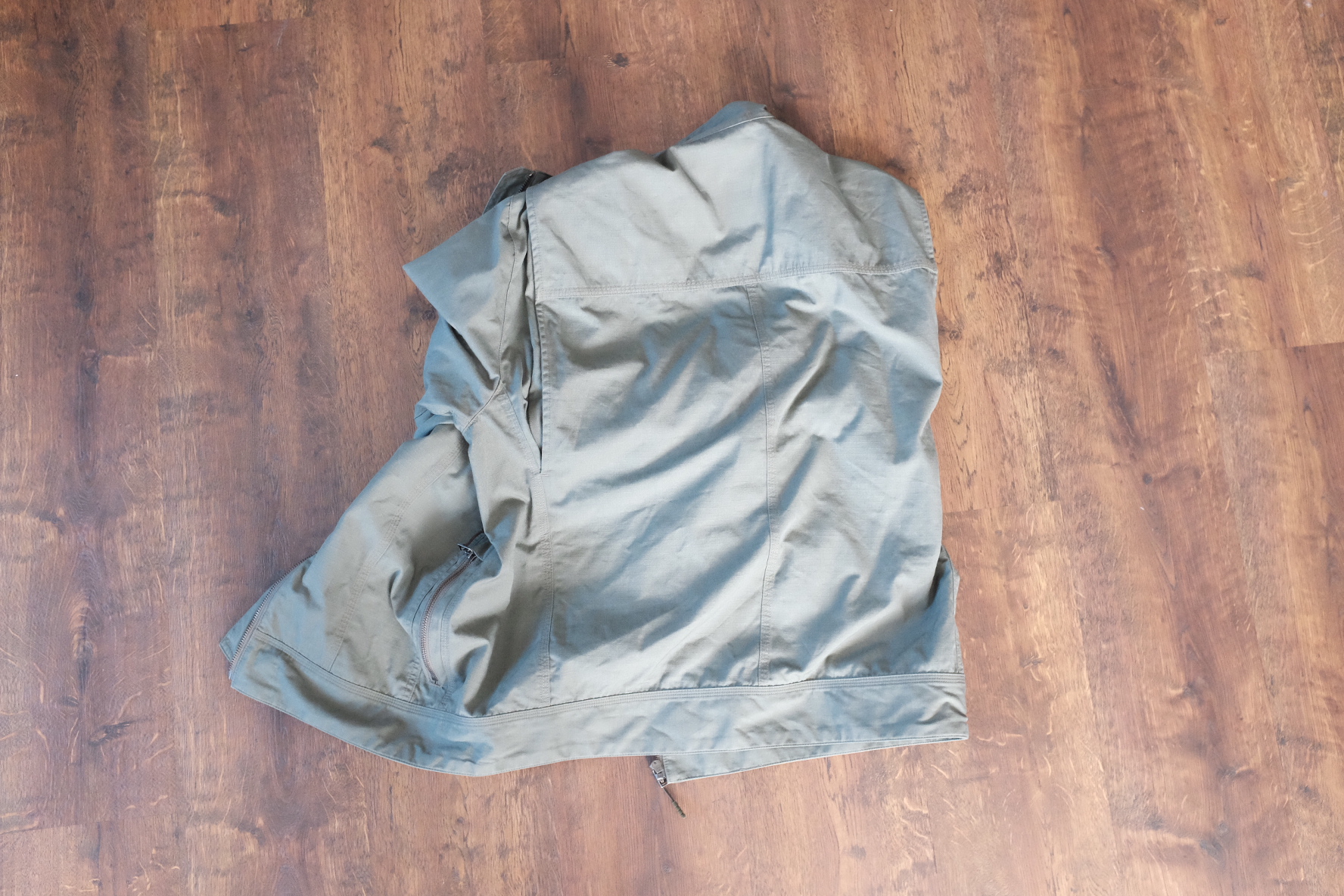 Still, the jacket trends towards military/tacticool look. I think it looks less tacticool and more military without the patches on the sleeves. Overall, I think Deception (which is like a deep olive, but constantly changes depending on surroundings and lighting) is a better color, but it is harder to pair with other clothing.

If you like the looks of the jacket, it looks as it does on the web, it is nice as a non-rain light jacket for spring and summer.

The jacket itself is unlined, so wearing it means you feel the heavy seams. This is the only uncomfortable part of the jacket, and something that I stopped noticing after a few wears. Overall, I find the weight to be very nice, and comfort wise it is familiar and easy to wear. 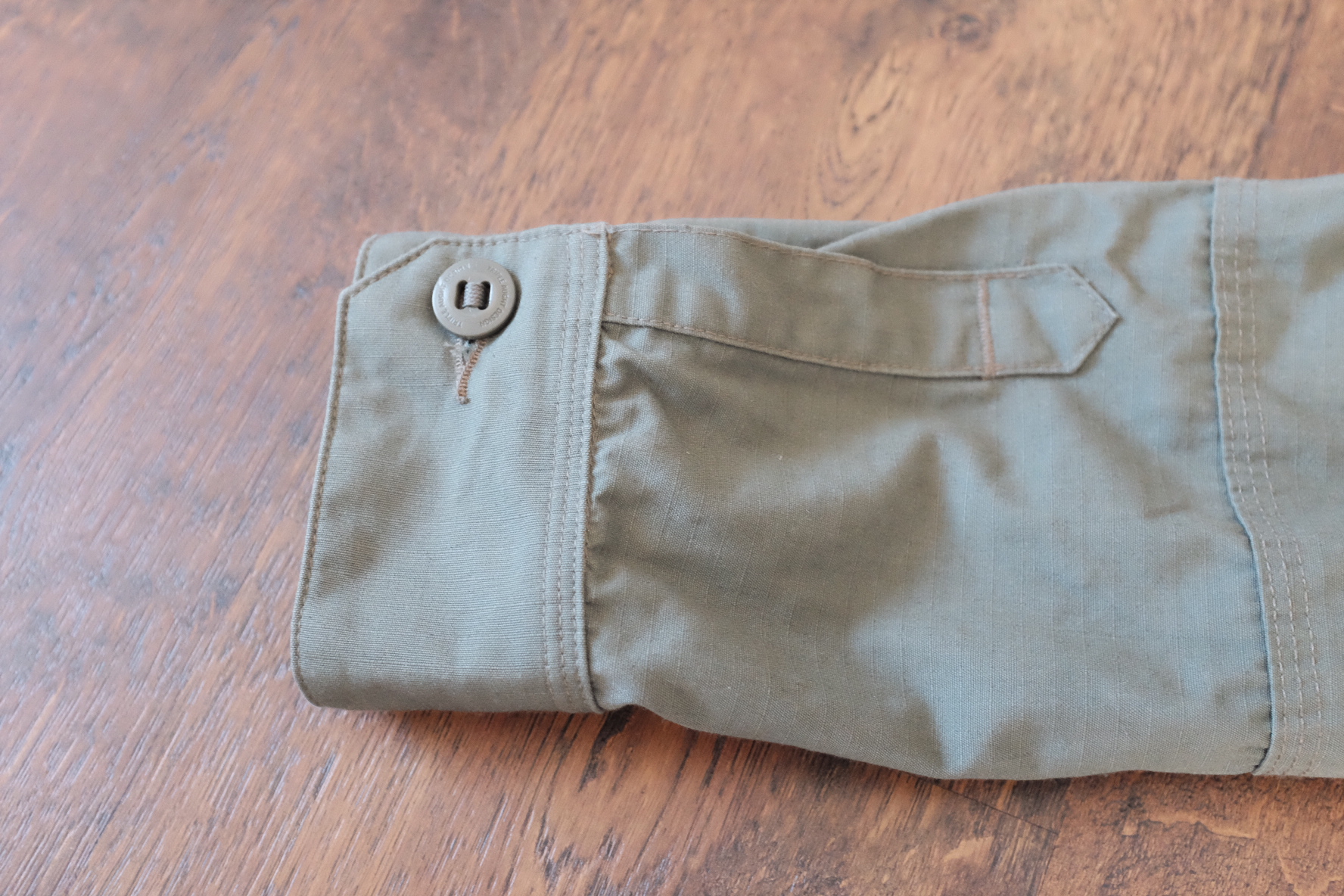 On the performance side, it’s fine. The garment design allows for a ton of range of motion in the arms, even though the fabric itself has no stretch. The DWR is more impressive that I would have assumed, however, the material itself picks up odors (like from a campfire) quickly. The performance this jacket gives you is durability.

To that end, I’ve taken it camping and worn it to work in the garage and other projects. The jacket shows no wear, and the reinforced elbows give me a lot of confidence that this jacket will last for a long time.

There are a few other really nice touches with the jacket. Both hand warmer pockets have a smaller inner pocket stitched inside which is angled towards the pocket opening. These are large enough to hold most knives or flashlights and go a long way to keeping your gear accessible. During the fall and spring I often keep all my gear in this jacket, so all I need to leave the house is my jacket and shoes. The back of the collar on the inside has a heavy duty hanging loop which works really well to hang the jacket.

The zippers are robust but are problematic for me. They are not the smoothest zippers I have used and can be frustrating to pull closed at times. Typically they require more than one hand to get going and can be a bit annoying. Since the pockets have space to securely stow gear, you have to work the zipper less frequently but still I wish they were better.

I really like this jacket. It’s a solid weight for fall and early spring, and is great even on rainy days if you are going to spend most of the day in the car or dodging rain drops walking in and out of buildings. The only negative I have beyond the zippers is that the style isn’t for everyone.