I’ve been wanting a better casual insulation layer, but also one that is built to the standards I’ve come to love through the testing we do for this site. Coupled with that, I have been wanting a shirt-jacket, ‘shacket’, as this type of layer. Top on my list was this Catalyst Field Shirt from Triple Aught Design.

I’ve now been testing it for a few weeks and have really put it through its paces. Overall, this has been a great warming layer, but has some strong caveats.

This jacket is packed with performance materials. The shell of the jacket is 100% nylon at 100 gsm with UPF 50. Triple Aught Design notes this is the same fabric used on their Latitude Field Shirt. Next, the shirt has “Amphibious Cloth” on top of the nylon in high abrasion areas, which here means the tops of the shoulders, and the elbows and forearms. This is the black cloth you see, and is meant to stand up to more abuse.

The insulation itself is Polartec Alpha, which I am going to dive into more in a bit, but for this jacket is fairly light at 50 gsm in weight. Lastly, the jacket is lined with 100% nylon at 95 gsm. Having said all that the jacket feels kind of heavy with a very synthetic drape to it, the insulation is much thinner than you will expect. The outer shell material is soft to the hand and the inner is smooth like silk.

All in all, some of the best performing and durable materials go into making this jacket.

I’ve previously written about Polartec Alpha Direct here with the Outdoor Research Ascendant Hoodie, and this is a slightly older variant, kind of. The difference is that Alpha is made to work between two layers of another material, whereas Alpha Direct is made to work with a shell layer, and go against your skin on the inside.

Alpha itself has a ton of hype around it. You’ll see lots of “designed for special forces”, which seems to be true and it’s true that the military does use this material a lot. It’s an active insulation layer, which means it still warms while wet, and is highly breathable. Alpha also gets mixed reactions from people who put it through its paces. For me, and for casual wear purposes, I’d put it as more breathable than a standard fleece jacket, but not as warm, and not nearly as bulky. 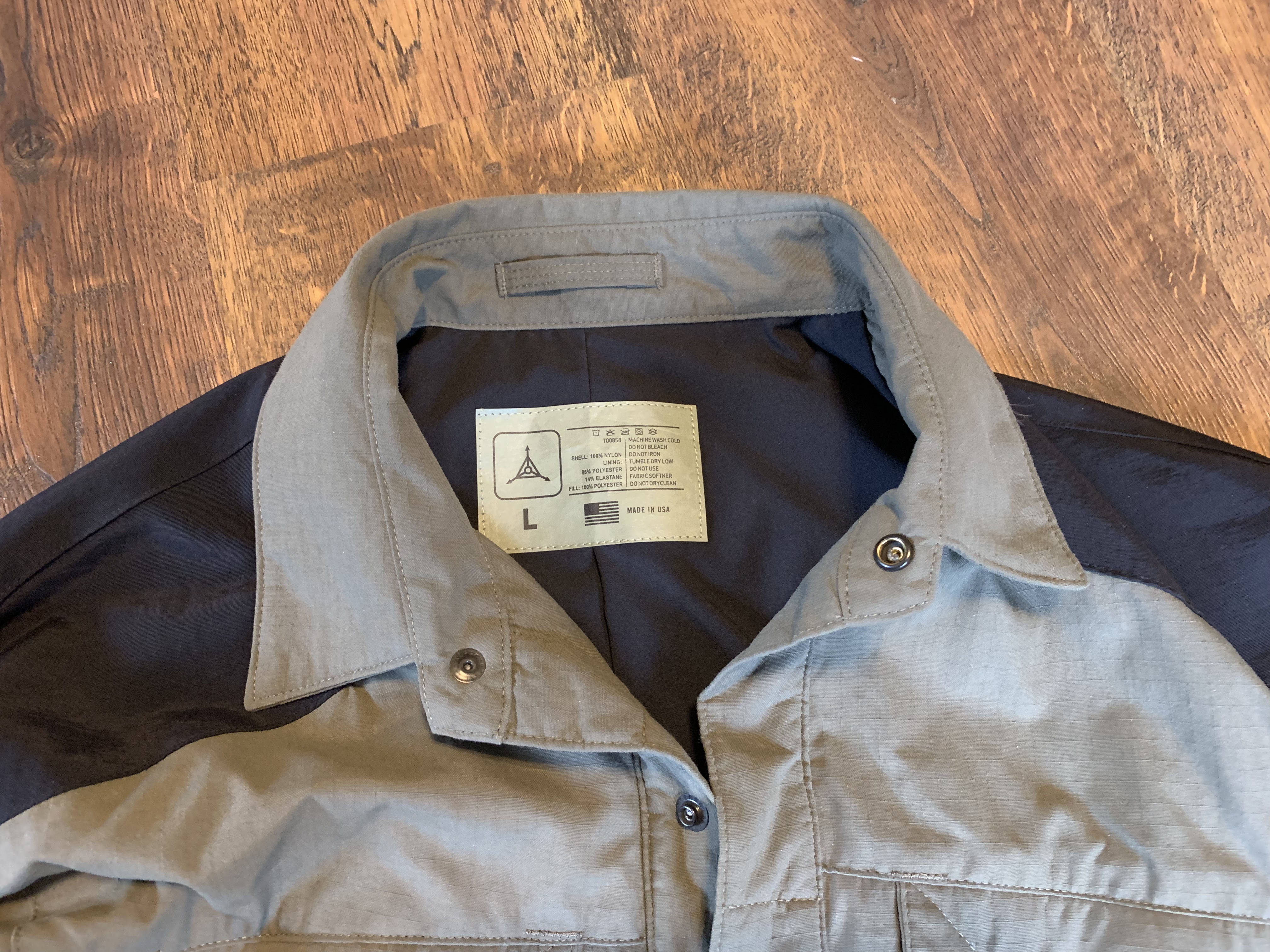 Don’t get an Alpha insulator thinking it will be magic, because it will not live up to that standard. It is, almost always, a better layer to have than a fleece jacket for casual wear.

As with all Triple Aught Design goods, they take a very distinct style towards tactical, or tacti-cool if you prefer. It certainly has color and design inspiration which has a nod towards military, a nod towards outdoor, with casual looks thrown on top. I like the style of this shirt, and think it wears well, but it will not be for everyone. 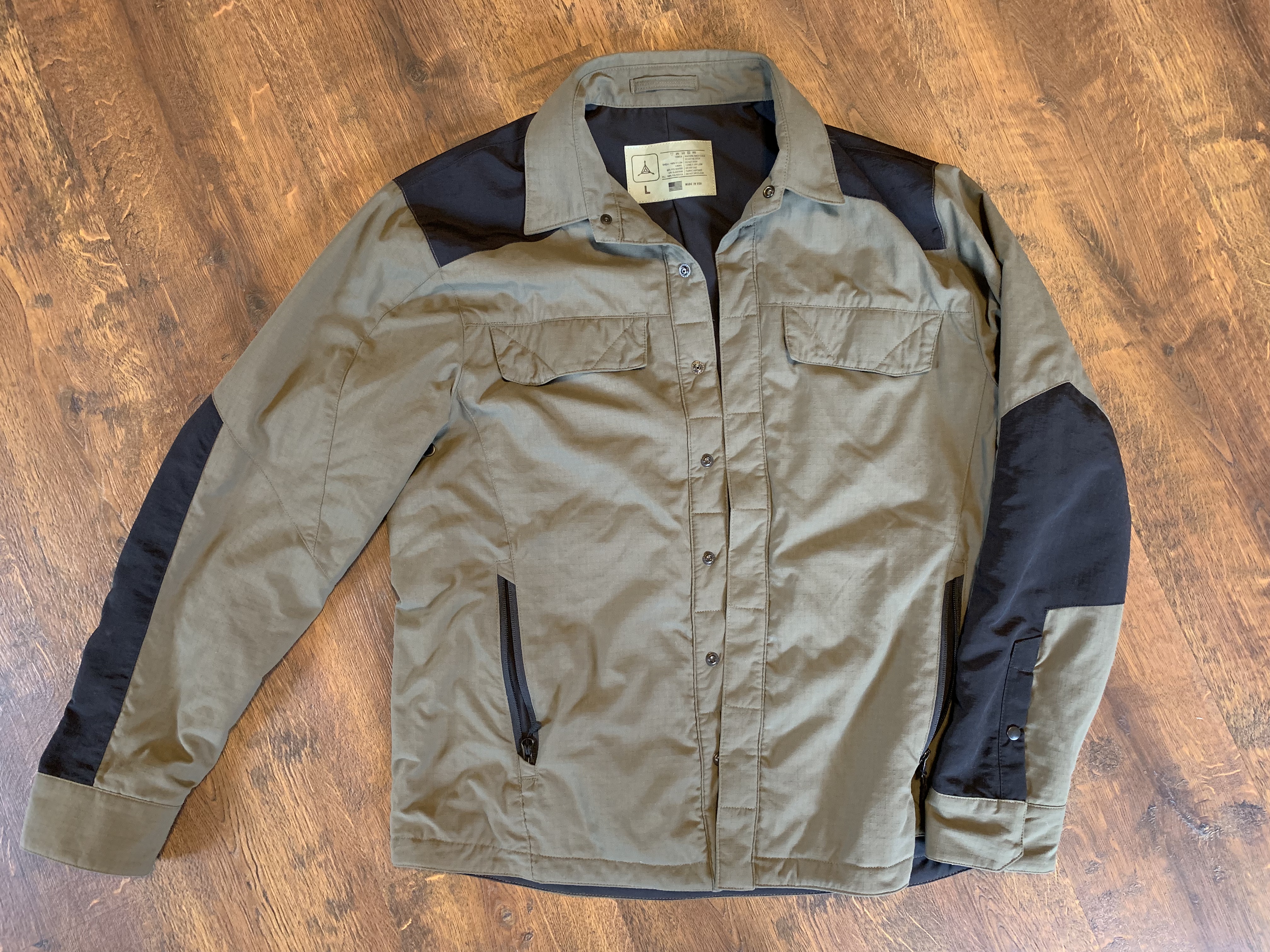 The first shirt I was sent was a size medium by mistake, which actually fit, and I replaced with a size L. The M fit really well, with the exception of the sleeves being a touch too short, and there being restriction in arm movements at more extreme angles. The L doesn’t look as good, but is far more comfortable to wear. This shirt is designed to be a relaxed fit, as you expect from a jacket, not like a shirt. Overall I need a size in between the two, but it’s not terrible. So be aware of potentially wanting to go down a size for a more tailored look, especially if your arms are not as freakishly long as mine.

This is both an outer layer for cool days, and a mid-layer for cold days. It’s not at all water resistant, and in my wear in rain, it tends to soak up the water, but dry quickly. Ideally this is something that breathes well enough and insulates strongly enough, that you can move between indoors and outdoors without having to shed the layer. Something which most people struggle with during the cooler weather months.

The armpits have two vents under each which are round and mesh in nature to help with breathing in warm areas. I’ve tested this at the beach, in my house, and around town. Wearing it instead of any other layers, as well as something to warm up with in the house. At times I’ve found it to be on the verge of too warm indoors, or in the car. If the sun is hitting you, you warm up fast. At the beach I’ve found that if I stopped moving I could get slightly chilled in it, start moving and everything is good. The wind resistance is decent but nothing to write home about.

What really sets this jacket apart is how comfortable it is to wear, as long as you don’t worry about keeping it buttoned. The front buttons closed with snap buttons, and I’ve found that the minute I start feeling warm, I can slide my hand down the shirt and open the front. This keeps my temp perfect in most situations and buttoning it back up tends to warm me up quickly enough. 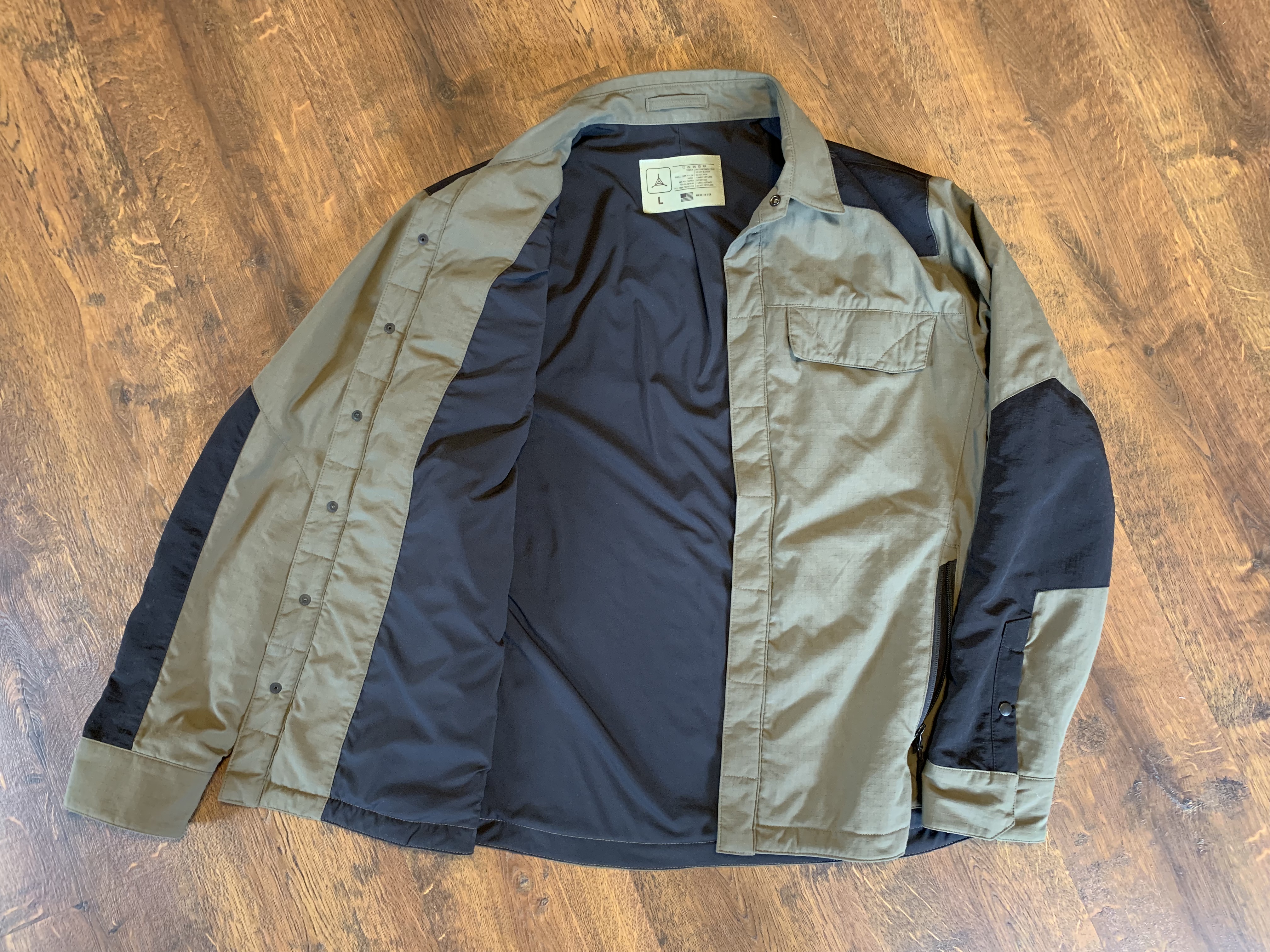 The jacket performs very well in every situation I used it in. Something like this will always need layers, but you can push it for short periods of time. This is a far better implementation of Polartec Alpha than the Ascendant jacket for everyday wear.

There’s a few small issues with this shirt:

These are small nitpicks but I can see them driving some people crazy. I give the shirt a pass on the forearm pilling because I’ve been working on a new stand at my desk which is unfinished wood and is quite rough, that’s exaggerating the pilling in this area of the shirt.

At $225 this is an expensive shirt, but not overly so for what it is. Most Polartec Alpha costs good money right now, as do most good shirt jackets. I think the biggest caveat is the styling of the jacket, followed by the lack of odor control in the arm pits. That said, I have no regrets getting this, and is likely to be my most worn layer this winter. I’ve been wearing it over just the Huntsman Henley I reviewed and find that to be a great combination.

You can get one here (the color shown here is Tarmac).

Here are a few of the competing products I considered if you want a shirt jacket like this, but in a different style: