Belts are one of those necessary things, but also one of those items where it feels like people don’t bother to try and innovate. So I get excited when I see something new. I have SlideBelts and appreciate the ease of buying/adjusting/wearing their belts. But they are bulky to wear and problematic when needing to move through airport security. There’s Arcade Belts where it’s a fancy elastic strap that wears more comfortably than most any other belt, but doesn’t offer the rigid security of a leather belt, and leaves a lot on the looks side.

There’s a myriad of tactical or outdoors belts with variations of g-hooks, cobra buckles, and other intricate systems for latching what is essentially nylon webbing together. But it all ends in something you likely won’t wear to the office, on a date, or generally at all.

And then there is GRIP6 belts, which seem so simple and inexpensive you might quickly dismiss them, but then in doing so you would be missing out on what might be my favorite belt I have worn. 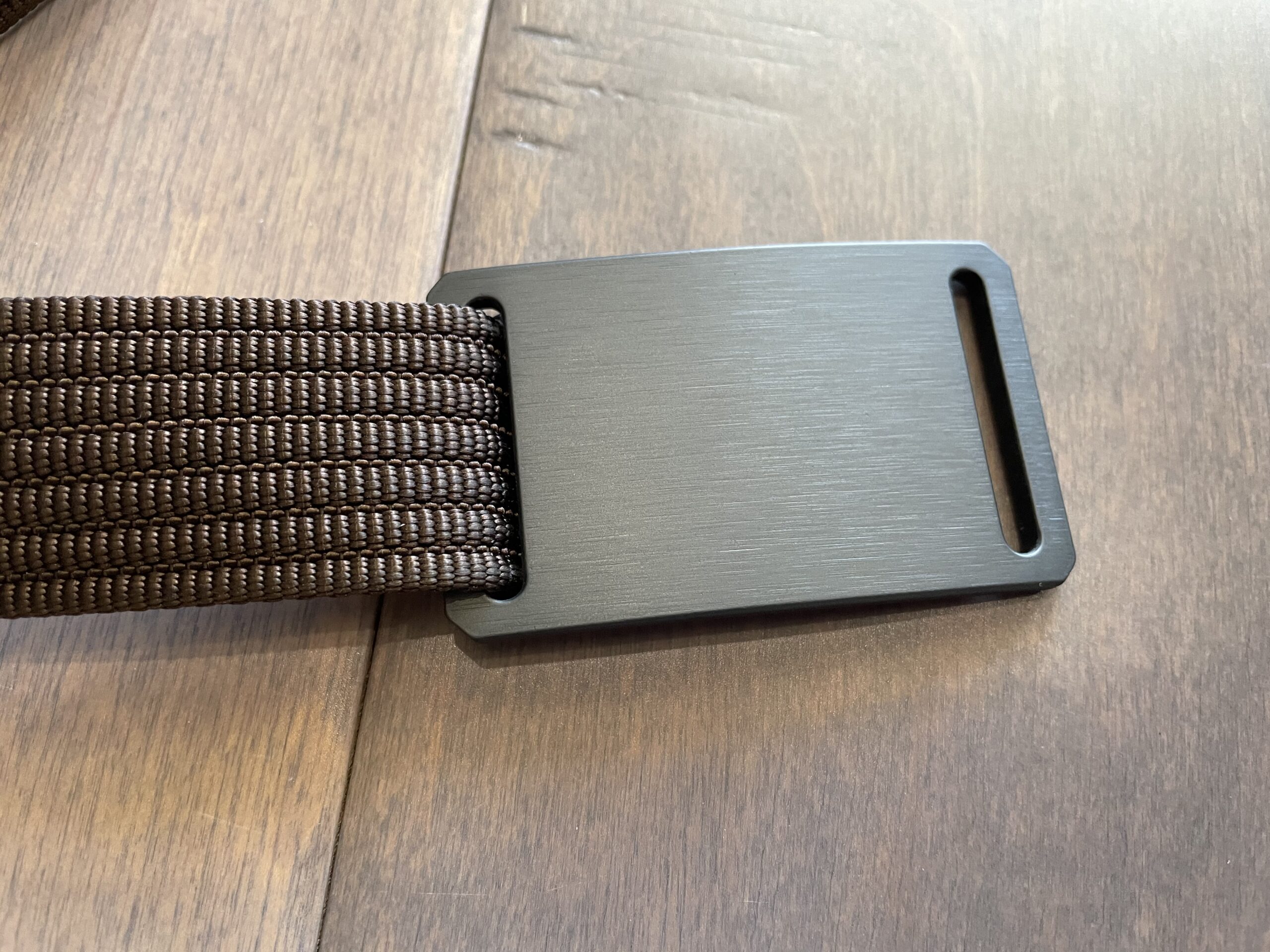 There’s two components to this belt: the belt itself which is offered in various colors and widths, but is just a nylon webbing strap; and then the buckle which also has various colors and some variations on materials but at the base is metal and slightly curved, with two slots on either end. 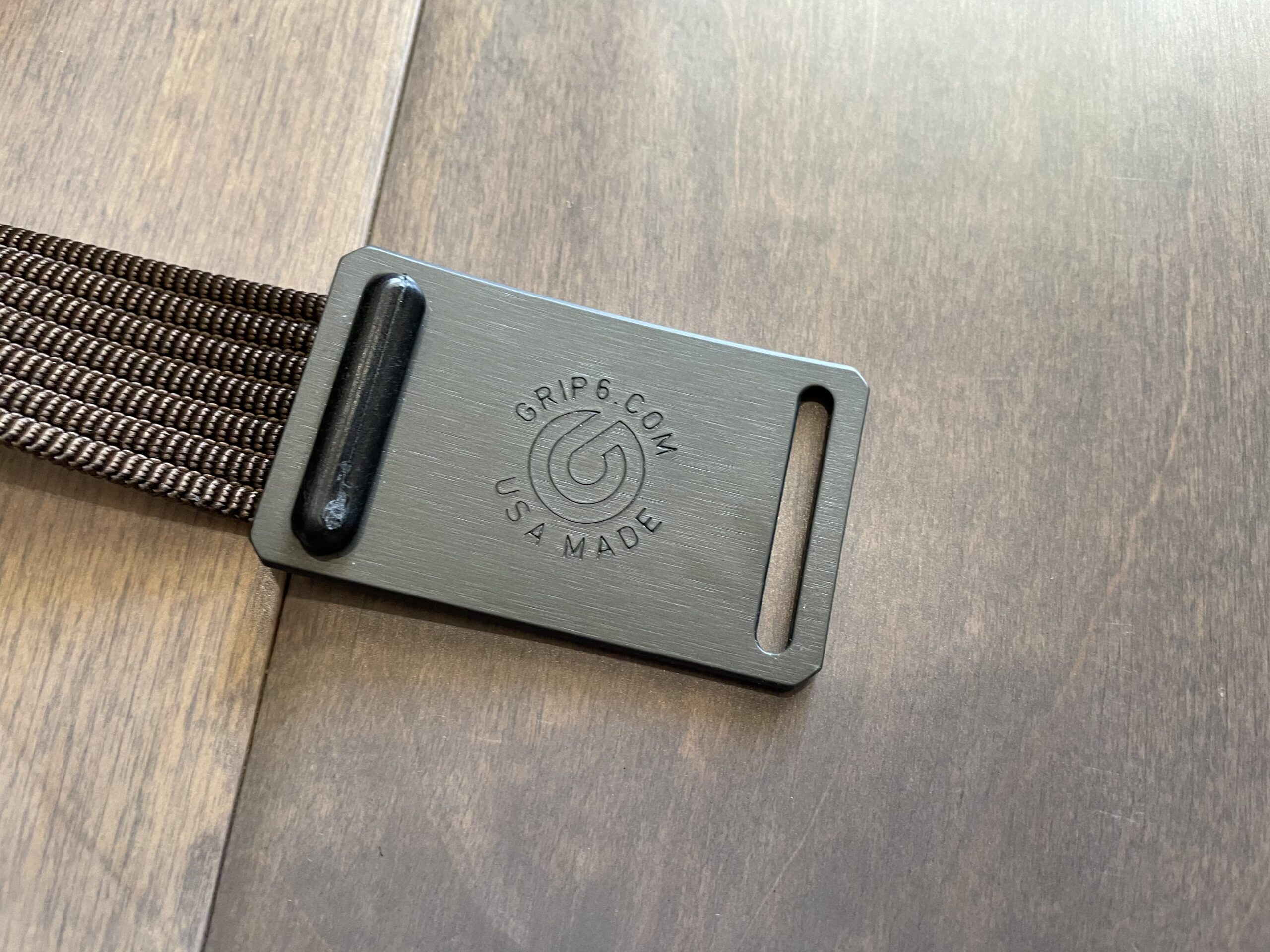 The end result of all this is a very low profile belt, which is easily adjusted, won’t trigger metal detectors, and is very secure overall. There’s even a model which is more rigid for those who need to clip things to their belt. For this I tested the narrow variant which is 1.1” wide with the metal buckle in the gunmetal color way.

The fit of these belts is tricky to figure out at first, but order your normal belt size. I’ll spare you my rant on why belts aren’t sized so you order your normal pants size. Anyways, I wear a 34” pant, and got a 36 sized GRIP6 and that seems to be sized correctly for me. 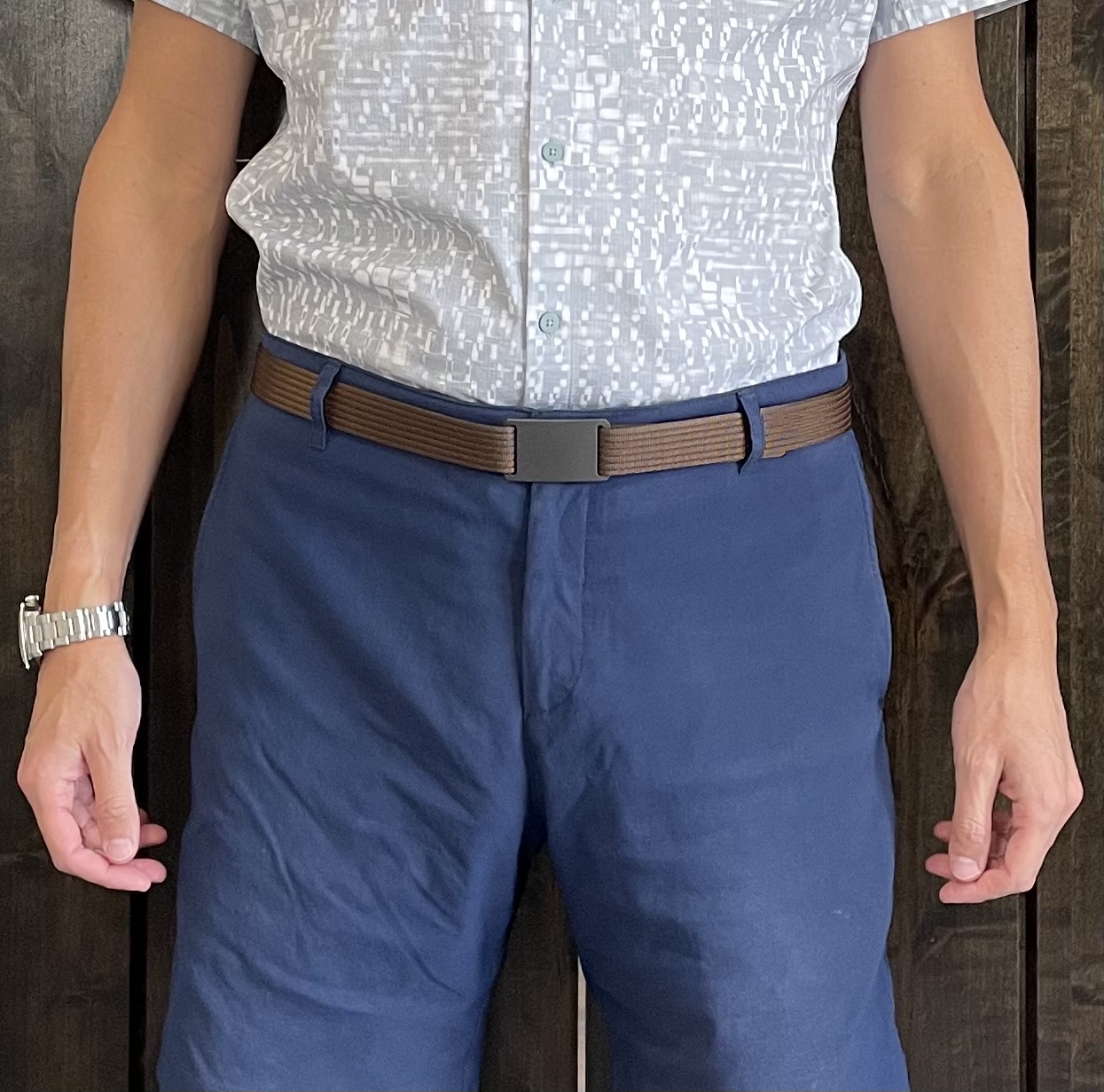 The belt itself is essentially a fancy nylon webbing belt. As such I think it works in casual to smart casual styling, but won’t cross over the line to business casual. My office dress code is all over the place, but I have been wearing it to work with my Futureworks (and other chinos) and a button down without a second look from anyone — I think it looks good for that.

The narrow size is right for chinos, but too narrow for jeans. You’ll need to pick which works best for your clothing, I have two straps in narrow (brown and black) and will likely grab a standard width version in another color for wearing with 5-pockets styled pants.

Because the belt has no set holes or ratchet positions, you can fine tune the fit pretty easily.

This belt is cumbersome to use for the first day. Because it doesn’t loop back to itself, instead you pass the free end into the buckle from the face, and then slide it along behind the buckle and down the other side. Friction essentially locks it in place, and you will notice the first time you try to take it off that there’s no worry about it coming undone by itself. I recommend watching this to get the hang of it. 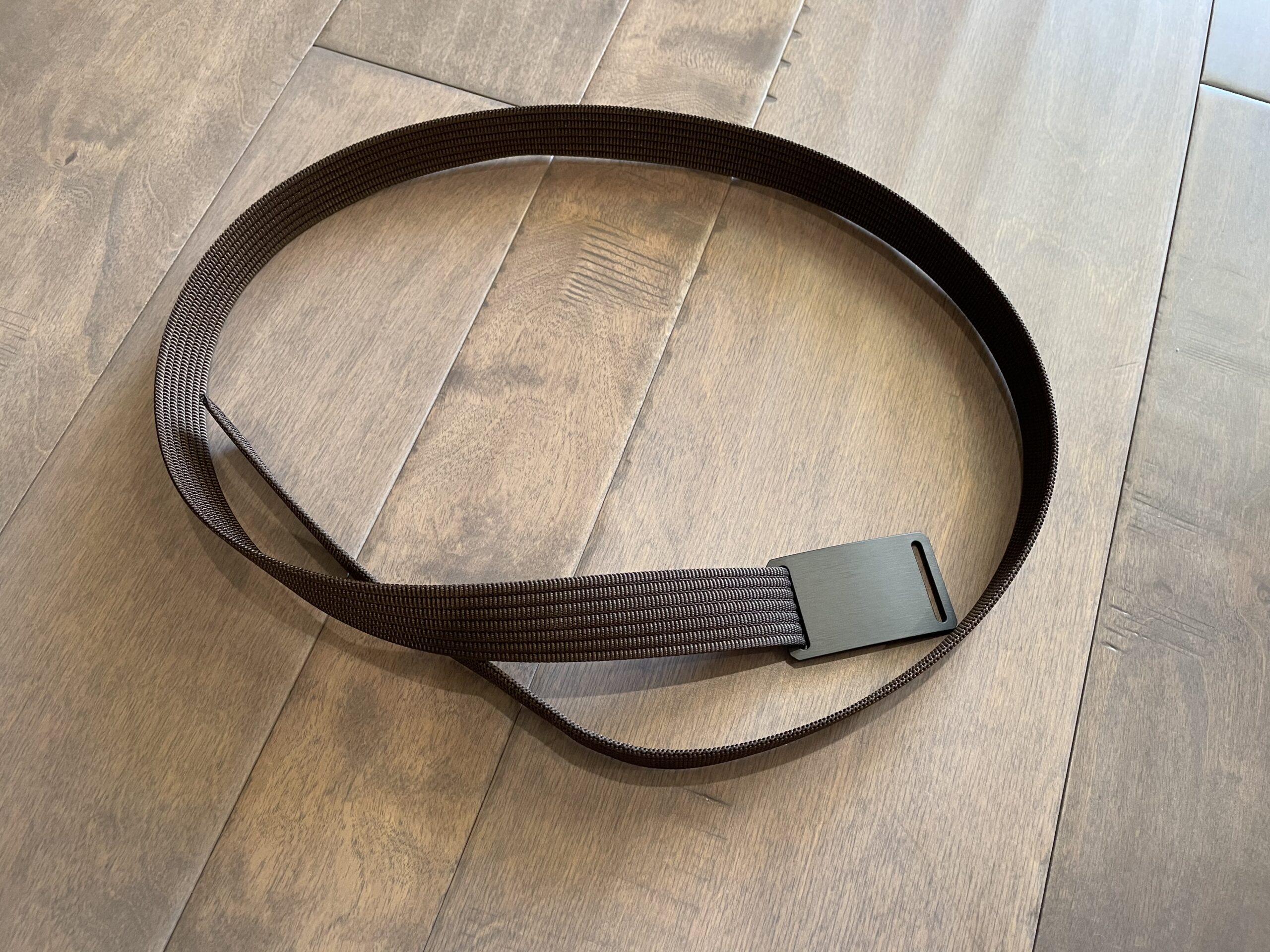 Once you get going this belt quickly shows how great it is. It’s very low profile and never adds bulk or weight to your waist. The fit can be fine tuned and really comfortable. In the narrow model I have, I find the belt curves to your body very well — like a nicely molded leather belt. All in all: no complaints, just happiness here. 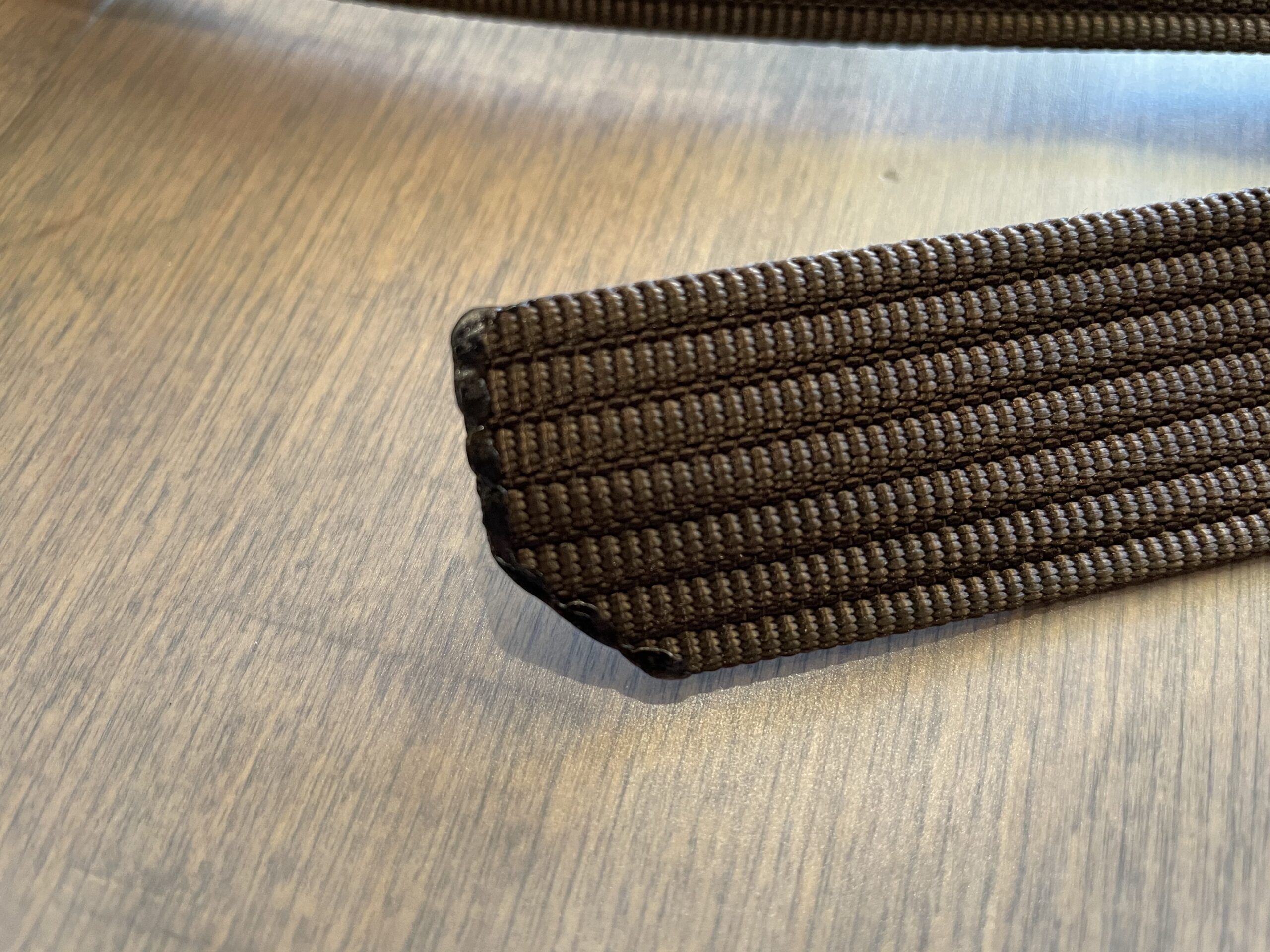 My only wish is that they looked more business casual because they are my favorite belts. I’ve instead decided to throw fashion to the wind, and wear these belts with everything. They are great, and you should own some.